‘MY COMPANY’ AND ‘TEAM DID IT’ –IMMENSELY POWERFUL PHRASES 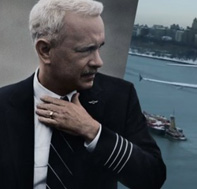 Taking charge responsibly when in trouble

Recall the movie “Sully” that reminds of Captain Sullenberger, who was the pilot of the US Airways aircraft that took off from the La Guardia airport with 155 passengers on-board on the fateful morning in 2009, that landed on the Hudson river. Captains instant decision to land the aircraft on Hudson made him the Hero and his examples on the leadership style are being quoted globally in the Aero world. Captains instant decision and his calibre to dynamically decide on the action under pressure was a heroic effort. Just reiterating the story in brief.

Few minutes after taking off from the LaGuardia airport the US Airways aircraft was hit by bird’s flock that caused both engines to malfunction and fail to power the engine. His co-pilot Jeff Skiles was in command then. No sooner, Captain Sullenberger heard the noise of both the engines shutting down, he instantly took the command of aircraft from his co-pilot. When an instant evaluation / analysis of aircraft not able to return back to La Guardia airport or to a nearby airstrip failed he decided to land on the Hudson river, however as a result all the 155 passengers were miraculously saved. All this happened in a surprisingly approx. 210 seconds of both engines malfunctioning and getting shut down.

When Do You Say It is ‘My Company’?

What do we understand from Captain Sully’s action? What kind of leadership trait does he possess? Bold decision making capability. Learning agility, when you are in a situation and you do not know what to do? Still take a predictable call and achieve success. This is learnt through experience…and can’t be acquired by learning in schools.

Commanding as the Pilot of the aircraft is his business and owning the responsibility of life of so many passengers. When Captain saw the crisis in hand, rather than blaming the co-pilot, taking excuse of the bird hit, boldly and without any panic mentioned ‘My aircraft’ was the key leadership style. These two words were immensely powerful.

Similarly, when the business appears to be in trouble, how should the leader respond? Is it that the leader blames his colleagues, team and look at them for pin-pointing the individual to be blamed, or leave the team to resolve the crisis by themselves. Never ever…. Own the trouble you are into in a Captain Sully way and own the responsibility. An excellent leader is the one who takes control of the situation. Hence like ‘My Aircraft’, ‘My Company’ attitude in the leadership should be well adopted.

When Do You Say ‘They Did It’?

After taking the predictable decision, Captain Sully lands the aircraft on the river Hudson and as a result all passengers were safely evacuated. While everyone including the media were hailing the Captain as a hero and saving all the lives on board, Captain Sully gave the credit to not only to his co-pilot Jeff and the three air-hostesses who held their nerves and did a fantastic job, rather to the ferry operators and the chopper crew whose timely support would not have saved all lives. Captain said ‘They did it’. Similarly, in a business scenario after recovering from the troublesome situation, the team involved is credited with ‘They did it’ is another leadership trait. What does above mention? The two key leadership traits that are extremely important in a Great leader –

Take ownership in a crisis situation.

Upon successfully completing the job, it is attributed to Team’s efforts.

The above two phrases are very powerful and there are leaders who always use these sentences in the correct order. When in crisis, leaders jump in and own it as ‘My Company’ and upon achieving success mention as ‘They did it’.

It is just that sometimes leaders get the order wrong! And When the crisis hits, they blame others ‘They did it’ and when the success is achieved, they take ownership: “My Company”

As a leader, it may be a good idea to learn and say those two powerful sentences, and yes, not to forget – when to say which one!.