SCIENCE, SIGNS AND THE HISTORY OF TIME! 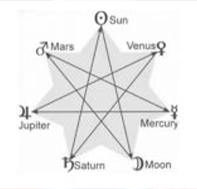 My late father was a child prodigy, a Gold Medalist in Mathematics, and a Geophysicist by profession. An extremely analytical and objective person, he was also an amateur Jyotishi (Vedic Astrologer). He would never predict anything for anyone but often people came to him from far and wide, just to seek advice. Whenever I’d ask him to teach me something he’d say, “There is a time for everything. When the time is right, Jyotish would come to you”.

In the late autumn of 2010 he took ill and told my Mom that she alone would have to stand by their children and that he wasn’t going to be around much longer. Six months later, he was gone. Not a day goes by without me regretting, for not having spent more time with him.

In January 2016, a Nobel Laureate of repute in Chemistry, made a statement to the effect that dismissed Astrology as BOGUS. What piqued my interest was that while my father, saw Mathematical patterns in all aspects of the universe, how could a Nobel Laureate in Chemistry find it to be a bogus field. Vedic Astrology is largely Mathematics. It has more books and far older ones than chemistry; some that even date back to several thousands of years. In the Vedic era, Jyotish Vidya (knowledge) was the highest form of education, given to the mature and responsible.

Something inside me caught fire that day.

I picked a Vedic Astrology book, from my late father’s humongous library, that same evening. Something I’d started several times earlier and could not continue after a few pages. This time was different though. I think this is what Papa meant. It was time. It started to make sense.

Eight odd months on, I have barely scratched the surface on Vedic Astrology, yet everything makes sense. It’s an ocean of sorts. Extremely detailed and methodical. Whereas the Western system of education begins with the knowledge of the external, the Indian system begins with knowledge of the self. I was fortunate enough to have been brought up in this environment and allowed to deep dive into a priceless pool of collective Vedic scripts. And time spent in the West gave me a broader perspective.

Knowledge of the self, revealed in mathematical abstractions and complex grids, is not on the menu for the curious bystander. It demands commitment, yielding rich dividends to the earnest seeker who can put in hours with unflinching sincerity, bordering on reverence.

Old questions resurfaced. I used to wonder why, when the whole system is changed to a metric system, why not ‘Time’ as well? Of all the things we measure everyday, Time is the most important one. Without Time, nothing would make sense. Or can it?

Time is one concept that connects us to the universe, in a measurable way.

The day begins with sunrise and ends with sunset. Then appear a Moon, Planets and the stars. While Maharishi Brighu (Vedic sage of Treta Yug) did document Uranus and Neptune, these Grahas were considered remote and unviable for Jyotish wisdom.

From ancient times, the Shani (Saturn) Temples in India have a place for the Navagrahas (nine planets) as well. These Navagrahas are Chandra (Moon), Mangal(Mars), Budhh (Mercury), Brihaspati (Jupiter), Shukra (Venus), Shani (Saturn), Surya(Sun) and the imaginary planets Rahu and Ketu. Now, the weekdays days are based on these seven physical Grahas. By Astronomy, Sun is a star and Moon a satellite. So it’s not arbitrarily picked. This is Astrological. The names of the days of a week are the names of the Grahas. The order is not the same as the astronomical order in the Solar System either. The order is determined by the speed of the Graha, relative to the observer. So Moon is the fastest, and Sun the slowest to complete a relative circle around the Earth, in a year.

The number of months in a year is accordingly, twelve. It’s the number of times the path of Sun and Moon intersect or, the number of New Moons. The Lunar cycles are fixed and by that the total number of days in a year comes to 360. Which is also why Vikram Samvat or the Lunar Calendar is perfect. There are no adjustments to be made for leap year or otherwise.

A deep understanding of Vedic Astrology makes understanding the ancient scriptures and epics sensible. At one level the scriptures are simple words that make sense as a document or a story line. On another level, they are deeply philosophical, mathematical and astrological documents that can enhance one’s understanding and give a perspective to today’s complex problems.

If one understood the movements of the Moon and the seasons change with it, it becomes extremely simple to understand the festivals in Sanatan Dharma. They are interwoven with the nature, seasons and the Grahas.

The profit focused opportunists or sinister intellectuals typically take what they believe is the most important ingredient in anything for profit making and then scale it. Reductionism, the bane of our age! Vedic Astrology is detailed and precise. The petal plucking, ‘He loves me, he loves me not!’ type pop Astrology, which most believe is the real deal, is nowhere close. It involves a lot of approximations and generalizations based on the tropical system. Vedic Astrology has little to do with predictions, much less with visceral matchmaking. Which is why it’s called Jyotish(Internal Illumination) Shastra (Study) and not Bhavishya (Future) Shastra. However since it is a powerful science based on sacred geometry and mathematics, predicting the future, is but, just one of the miniscule benefits. Most Jyotishis prefer not to do it. The study of Vedic Astrology is best used for bettering oneself as a person, society and the world at large. That’s why Vedic Astrologers are called Jyotishis. The 16th century secret Bavarian cult, derive their name ‘Illuminati’ from Jyotishi. The fact that they are a ‘secret’ society makes their intent questionable.

What the modern progressive intellectuals have done is to reduce one of the most comprehensive, sophisticated and elegant systems of understanding the Universe, to a body of pseudo-science, oversimplifying its complex concepts to exasperating crudeness.

It is no different than comparing a Plane to a three-wheeler auto rickshaw, because both have three wheels. Then reducing the value of a Plane to that of an auto rickshaw. Further put only as much fuel in the plane as one would put in an auto rickshaw and then complain that the Plane doesn’t even move, let alone fly. Show this as evidence to the world and conclude, Planes are a myth and don’t really work. This is what Dr Venkatraman Ramakrishnan, the Nobel Laureate in Chemistry did, essentially. I respect the Nobel committee. Maybe that’s why they chose him for a Nobel in Chemistry and not in Mathematics. Astrology needs a solid foundation in Mathematics. Without it, one is like a kid trying to solve Differential Calculus problems, with no knowledge of basic Algebra.

The Historians lose out the battle here as well. Without adequate knowledge of Vedic Astrology and in their naivety, they end up shooting in the dark and make wrong assumptions. The genesis of all religions is Spirituality. They try to be objective and fact based in a field that is totally subjective. The one objective aspect especially in Indian history, Vedic Astrology, that should have been considered, they have chosen to demonize. Everything that’s wrong with the rulers that want to control the future, by controlling the History, is this. They try to solve math problems in humanities. History has been bastardized, to say the least.

A lot can be learnt about any modern day religions from the basics of astrology and relating the fundamentals back to the ancient scriptures. Islam for example has a star and crescent moon on the Islamic Flag. Followers of Islam are Venus followers. The holy day in Islam is Friday, which is presided by Venus. In the ancient Indian scriptures, description of Shukracharya is such. Understanding the nature and strengths of Shukra (Venus) will help understand the empirical rituals better.

Recently, I was at a party. A young girl started chatting with me about my book, ‘Lost Wisdom of The Swastika’. A few minutes into the conversation, she was confused how Astrology can be taken seriously and how can twelve sun signs be generalized for the 7.4 billion people on this planet. Her beeping wristband interrupted us, telling her it was time for her to drink water. Being completely unaware of one’s own senses and the nature around has such catastrophic effects. Astrology is reduced to a 200-words column in the Sunday Times.

Vedic Astrology is about connecting back with the nature, with a scientific temperament. Going deeper into this subject is out of scope of this article. It should suffice to say that Astrology is like a GPS for an individual, society, country and the world. Should we throw away Modern Science and practice the ancient Indian Sciences instead, only? Absolutely NOT! Knowledge is always good. Let’s fortify it!