HOLY TRINITY – SELL BY FEAR OR SELL BY FAITH! 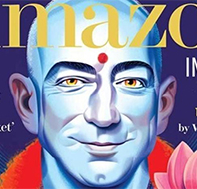 With the latest push toward complete digitization, Prime Minister Modi might have made the last leap towards the age of technology or Kalyug (Kal Purze ka yug)

My mother often tells us how Nana-ji (her father) used to advice them to wear cotton, but they would rebel and wear the flashier, trendier, synthetic clothing instead. A decade later cotton was back in fashion again. Synthetic was out. The more I delve into the native culture, philosophies and the age old wisdom, the more I realize that we are probably not at the highest point of human civilization. We might be at the lowest.

The point is not that thumbprints have been known to and extensively used as unique identifiers in the Indian subcontinent. It is the science behind, that has been known for thousands of years. The nadis in nadi astrology (an arm of Vedic astrology), which is at least 5,000 years old, uses thumbprints to reveal all the details of a person.

Don’t take my word for it! Go try it. This is a phenomenon, no one can explain with modern science. It exists. A 90% hit rate and 100% accuracy if one’s Nadi is found, based on their thumbprints. Inexplicably many things exist, unexplained and un-understood!!! I’m a strong believer and supporter of science, more importantly, scientific temperament. I don’t quite understand when people want to dismiss something as dogma, if it can’t be explained by science, yet. Give it time. Science will get there too. Up until the early ‘2000s in India, one could do a real estate transaction with just thumbprints. The clerks could decipher the uniqueness of the prints. While we called them angoothachaap (illiterate), the elite of the society have come a full circle. One can get through their important tasks, just using fingerprints, on their phones.

When Einstein first spoke of the ether/aether and theory of relativity, it bore stark resemblance to Shiva, the Lord of Ether, one of the holy trinity. Even though the theory of ether remains unproven scientifically, the Ethernet used in computer networking, found its inspiration from Ether (Ether-net), Shiva!

As of December 1, 2016, the official debt of the United States government rose to US$19.9 trillion. Needless to say, the US businesses have been under tremendous pressure to perform and grow. Earlier, this year when Fortune magazine came out with a cover with Amazon’s Jeff Bezos as Vishnu, many took offence. They probably didn’t realize that this wasn’t just casual banter. It was solemn messaging. Beguiling seller or a Naziesque marauder? Amazon, the preserver or Vishnu the second of the holy trinity. Take your pick for Brahma!!! Facebook and Google? What doesn’t sell by instilling fear, should, by invoking faith. What they miss always is that the holy trinity, are the principles, with energies that power them. Much like the Swastika was appropriated without wisdom, this hits the wrong target and likely a dud. The world knows where Nazis are today and what a mess they have made of the symbol of universal peace and goodwill. A topic too esoteric for this article. Technology needs to be a democratic enabler.

Every new step we take in the – what we believe to be the evolutionary direction – is only an improvement in the way we do things that we believe, lead to “our” peace and happiness. Nothing fundamentally different in the needs we service. Here the idea seems to be, to seize control from wisdom and cede it to knowledge. By the Vedic way, there are at least four ways innovations take place, Aantrik, Mantrik, Tantrik and Yantrik. Aantrik is the closest to the human in how one perceives reality. Yantrik or technology-driven, is the furthest from human awareness, by the philosophy of the Swastika.

Time, is the real test of wisdom. If it lasts, its real and effective, else it was just a folk tale. Technology is still in its nascent stages. We are making significant advances in Artificial Intelligence and such but even a 3D printer still prints what we ask it to print. And we only have a limited imagination. So we print, what we already have or know. We are still not at a point where Technology and Science will cease to be the media and have conclusive answers for us.

With the latest push toward complete digitization, Prime Minister Modi might have made the last leap towards the age of Technology or Kalyug (Kal Purze ka yug). The cyclical evolution is unavoidable, except the pace that we adopt it. The systems are not perfect as yet though, to shield the poor. When we go to a 100% digitization, the poor might be the worst affected by lack of protection from vulture finance agencies and ill-reformed banks. Technology does not impede immorality as we have seen in the recent cases post demonetization.

We could all move from Orkut to FB and there was no loss. Or from Amazon to Flipkart to Snapdeal and what not, there are still no losses. Amazon embarked on a journey to completely change the retail landscape only 20 years ago. They did, that wiped out the largest of retail chains. Only to circle back fully and setup Amazon’s brick & mortar retail store, again. We did skirt the FB FreeBasics idea or colonization, earlier this year.

Its encouraging to see the ruling party taking a hardline, non-populist step knowing well that it could possibly create an irreversibly irascible vote base. Let’s tread cautiously, lest the damage be conclusively irreparable.

My lassitude comes from the increasing stick (from carrot & stick) approach to get people online for financial transactions, that’s evidently much higher in the cities. With the US president-elect, Donald Trump making a statement to the effect of pulling the plug on the Internet from selective geographies, hope we don’t push the poor towards another Churchill-ian famine. Mr Donald Trump’s allegiances are still quite questionable. He’s vowed to make only America, great again!

Disclaimer: The views expressed in the article above are those of the authors’ and do not necessarily represent or reflect the views of this publishing house. Unless otherwise noted, the author is writing in his personal capacity. They are not intended and should not be thought to represent official ideas, attitudes, or policies of any agency or institution.